For Chat go to:

For Chat go to:
988lifeline.org/chat

People who suffer a serious injury or suffer from a chronic condition involving severe pain have few avenues to take to relieve their pain. One of those avenues leads to addiction. I know because I suffered from a serious injury in 2007 which affected my left leg and foot. After a month of attempting to “fix” the problem, I was directed to a pain management specialist. The pain I was suffering from was real. As such, I had a 10 minute conversation with this pain management doctor and he handed me a prescription for OxyContin. He never warned me about any risks of addiction, even though the prescription was written for me to take one tablet three times a day. This was not take as needed. This was take every day, three times a day. 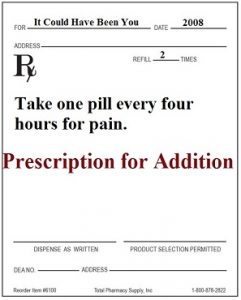 I took the prescription and filled it, but I never followed the directions to take them daily, never mind three a day.

I was lucky. I knew the addictive nature of opioids because my sister had struggled with addiction since she was 17 after an accident that left her dependent on opioids. I believed that most people could take opioids when they had legitimate pain as directed without getting addicted, but that I had an addictive personality. My family history of having a father with alcoholism and a sister with drug abuse made me believe that I was prone to addiction. And that scared me. Thus, instead of taking the prescription of OxyContin three times a day, every day, I endured over a year of severe pain. I slept a lot. I was confined to my bed. But I never became addicted.

My particular problem involved pain signals misfiring after an injury, something called Reflex Sympathetic Dystrophy or Chronic Regional Pain Syndrome. Outcomes vary for individuals with this serious medical problem whose primary feature is uncontrolled pain. Again, I was lucky. Refusing to accept that I would be wheelchair bound, I eventually found an alternative to pain medication involving nerve blocks and specialized topical cream (which included morphine).

When I woke up the morning after that first nerve block, I cried. For the first time in almost two years, I didn’t have pain in my foot and leg. Although I had to return a few times for more nerve blocks, it is over 10 years later and there is no wheelchair in sight. I haven’t had to see my specialist in over five years. I am in full remission! Not all conditions that involve severe pain can be cured. In fact, few are.

The thing that hits me hardest when I think about this particular chapter of my life is how easy it would have been to develop an addiction to opioids. If I hadn’t seen and lived through my watching my sister change from addiction, I likely would have become an addict. That pain management doctor was giving me a prescription for addiction. How many others got that same prescription and now have had their brains rewired due to addiction? I am lucky twice fold – I found a cure and I didn’t get addicted.

The next time you see an addict, remember it is very likely that the first “high” they experienced was given to them by their own doctor.

CFBHN is compliant with the requirements of Section 504 of the Rehabilitation Act of 1973, 29 U.S.C. 794, as implemented by 45 C.F.R. Part 84 (hereinafter referred to as Section 504), the Americans with Disabilities Act of 1990 (ADA), 42 U.S.C. 12131, as implemented by 28 C.F.R. Part 35, and the Children and Families Operating Procedure (CFOP) 60-10, Chapter 4 entitled “Auxiliary Aids and Services for the Deaf and Hard-of-Hearing”. CFBHN will make available the appropriate auxiliary aids and services at no cost to deaf or hard-of-hearing clients and companions. To Report suspected Fraud, Waste, or Abuse you may send an e-mail to:fraudcompliance@cfbhn.org.

Need Help?
GIVE US A CALL
OR LEAVE A MESSAGE: